As I guess is an inevitable part of one’s first day back at the office after nine Yuletide days in the motherland, my mind has started wander(lust)ing to what I’m going to do this year, and where I want to do it.

2014 was swell on the travel front; I spent two-and-a-half weeks on my own in Thailand, Vietnam and Cambodia. Never had dating a bona fide workaholic been more surprisingly beneficial; I really wouldn’t have gone on my own if I could have helped it, and yet I ended up having a waaaay better time because of it.

Later on in the year, I spent ten days in Cornwall (the longest I’d been home in the three years since I’d moved away) and then, not long after, ten days doing so much nothing in Florida. With a couple of city breaks, including Paris and Vienna, thrown in for good measure, I’d say that’s a pretty good year for my passport. Less so for my bank balance, but shush…

At the mo, I’m saving for a trip-of-a-lifetime to Alaska in 2016. For now, this leaves me Europe-bound, lest I eat into dollar that would be better spent on a shit load of husky sledding and whale watching. Here’s how to be a dreamer, almost entirely within European confines… 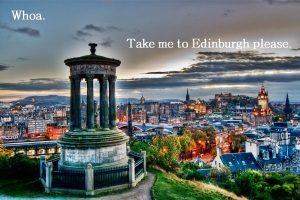 I’m intrigued by the amateur theatre scene I hear so much about as well, so if/when I go, I’ll catch one of those and report back.

Dream addition: A trip to the Outer Hebrides. It’s only an hour on the plane from Edinburgh, and I want to see views like THIS:

One of my Northern Irish cousins is getting married in May! I’m so excited. I bloody love a wedding. I’ll be flying over to help them wingding through the happiest day of their lives and thought I may as well take a trip to a part of Ireland I’ve never been to before while I’m there. Long have I been intrigued by the arty output of Ireland’s ‘Rebel City’ (particularly the Cork Film Festival… gimme Cillian Murphy) and 2015 could well be the year I hop, skip and jump my way over.

My oldest friend is also my least predictable one, bless her cottons. I Skyped her just before Christmas and asked where she was (the pristine décor behind her was certainly not her own bedroom) and she looked shocked, embarrassed and said “Oh God, didn’t I tell you? I moved to Istanbul last week!” There are no words for this woman.

She lived in Jordan a few years ago and my five day trip, complete with a night spent in a Bedouin camp in the Wadi Rum desert and swim (see:float) in the Dead Sea, was the best holiday I’ve ever been on, so there’s no way she’s getting away with moving to Istanbul without a visit from yours truly over here. Colourful bazaars, tasty eats and old old archaeological findings are top of my Turkish to-do list; and you just know the Islamic architecture in the world’s third largest city is going to blow you away.

And this is not just because I watched Frozen again last night (with song name puns flowing between my sofa-pal and myself). A few years ago, I entered the #VolvoJoyride contest (make a Pinterest board of your dream roadtrip; winner gets to go on it. Spoiler: I was not that winner) with the idea of driving from Oslo to Bergen and back again. I planned to eat meatballs every day for a week, see the Voringsfossen Waterfall, befriend a moose, catch a glimpse of some midnight sun, and find out a little more about the Alta rock carvings. Since dreaming up this little journey, I’ve decided to bring a trip from Copenhagen, driving up through Sweden, into the mix.

This IS going to happen in 2015. I just need to figure out who’s riding shotgun. My new moose friend won’t count.

Moscow is going to be my main port-of-call. Hello to the historical significance of the Red Square, the straight up beauty of Saint Basil’s Cathedral, the Bolshoi Theatre, Lenin’s Mausoleum and vodka on my cereal. I’ll swing by St Petersburg to get an eyeful of the Winter Palace. All the while I’ll be living Anna Karenina in my head (…no, I shamefully haven’t read the book; I loved the film adaptation though).

I’m not exactly quiet about the fact that I have panic disorder, and the main thing that brings on a panic attack is being trapped in the throng of a bustling crowd. Eurgh, even typing that just made me shudder. Marrakech, with all of its labyrinthine souks and medinas, scares holy hell out of me; but I’ve wanted to go for so long, I’m not going to scrap the idea now. Plus I’m obsessed with Casablanca (the moviefilm), so a daytrip up to the north coast is an absolute necessity. I reckon I’ll spend more time on the outskirts of the cities, pretending to have at least an ounce of the fabulousness of Isla Lund ❤

So there you go: the six holidays I ambitiously plan on taking this year. Considering my new year’s resolution is to go home more often, I’d better find a way to get my boss to agree to giving me six months’ holiday per annum, pronto.